Wine maker Don Corson wishes you a wonderful holiday season from all of the Camaraderie Crew!

Tasting Around the World at Camaraderie Cellars

August is Washington Wine Month. Winemaker Don Corson talks about Camaraderie Cellars award winning wines and their origins from around the world.

December is Wine Club Month!  This month’s selection is the 2016 Reserve Cabernet Sauvignon from the Dionysus Vineyard and 2016 Tempranillo from the Crawford Vineyard.  Watch here as Don introduces Wine Folly’s aroma wheel to help you identify the flavors in wines as well as a tasting of the club selections.

Chat with the Winemaker 6

Your September Wine Club Package is ready to pick up! Watch Don introduce you to our first ever Grenache, talking about its relevance in the world of wine and how it differs in various places throughout the world. He also provides tasting notes for the 2018 Madrona; a 50/50 Blend of Syrah and Grenache.

Chat with the Wine Maker 5 – Malbec Anyone?

Our latest Chat with the Wine Maker explores the wonders of Malbec. It includes a virtual tasting of four of our older vintages all grown at the Crawford Vineyard. Salud!

Chat with the Wine Maker 4

Experience a virtual tasting of a vertical flight of Camaraderie’s Tempranillo wines. What is a vertical tasting you might ask? It is a tasting of different vintages of the same wine to experience the difference aging and growing conditions have on the wine, its aroma and flavors.

Chat with the Wine Maker 3

Today’s Wine Maker Chat is a virtual tasting of the June 2020 Wine Club selection. Watch wine maker Don Corson talk about the 6 “S’s” to wine tasting and discuss the 2015 Dolcetto and 2017 Syrah.

Chat With the Winemaker – Bottling time!

Please check out our video that speaks to all the decisions and items that need to be arranged to accomplish bottling our wines!

Chat with the Winemaker – Episode 1

Learn more about what happens in the winery during the off-season as well as some fun information about the 2019 vintage.

Malbec anyone?  Winemaker thoughts after visiting Mendoza, Argentina in the Spring of 2016.

This was my first trip to Argentina, let alone the other side of the Equator.  As a graduate Geographer by training, I was excited to go, even if it included 15 hours of flight time.  As a Washington State winemaker for now moving into 25 vintages, and one that has been making Malbec for some years now, I was interested in how they did things.

While winemaking in Argentina goes all the way back to the late 1500’s, its more recent history is not unlike that in Washington State.  Things really started to kick into gear in the late 1970’s and into the 1980’s.  Quality was improved to international standards with outside consulting and an emphasis was placed on varieties that really grow well.

The variety that began to outshine the rest was Malbec.  Now, however, there are many other varieties being successfully grown and the wines taste terrific, especially with the national food, beef on the BBQ!

Terrior, that term that attempts to capture the viticultural “genius” of a place from soil, to microclimate, to underlying geology, to sun orientation, is on full display in Mendoza.  The vineyards are among the highest in elevation in the world at 3,000 to 5,000 feet.  The “soils” are more cobbles than dirt, and their location on the east side of the Andes makes for very dry growing conditions.

All of these factors affect the taste of the wines we sampled. The high elevation makes for grapes that get more ultraviolet rays than at lower elevations and even with aggressive “canopy” management, grape skins toughen for protection.  The results are wines with a fair dose of tannins that require care to tame.  This usually takes the form  of oak aging, though I was surprised that many of the wines we tasted were only in barrel about a year.  Top wines were barrel aged, mostly in French oak, for 22-24 months, similar to what we do here at Camaraderie Cellars.

Those cobbles?  Mendoza wines are strong to the “mineral” side of things.  Fruit notes were of cherry and berry, but aromas were subdued in the 100% varietal wines we tasted.  An exception was a wine I was unfamiliar with until my visit called Bonarda.  Originally from Italy’s Piedmont, it had been a workhorse “blender,” but is really showing well now on its own.  I’m reminded of our own Cabernet Franc and Merlot that have a similar world-wide reputation, but are wonderful here in Washington State.

How is a Malbec from Camaraderie different from one from Mendoza?  First, our fruit comes from the Crawford Vineyard near Prosser.  It is a cool site and the fruit is harvested almost at the end of the season.  Fruit character is more present at every level and is not so tannic.  This may be from our extra time in barrel compared to the majority of wines we tasted in Mendoza.  Also, our grapes don’t get the UV impact of being 3,000 feet higher in elevation.  Also our latitude is 15 degrees further from the equator than Mendoza.  I think that our growing year and variable seasonal “insolation” has an effect.  Our harvest time is much longer and that “hang time” is really good for full flavor development of the grapes and the wines.

I don’t think I will ever taste the wines I make in the same way after my trip to Argentina.  I make wines from Washington State grapes, and even if I wanted to make a clone of a Mendoza Malbec, I’d never be able to.  And, why would I want to do that anyway?  I have huge respect for the wines of Argentina and now have many in my personal cellar and think you should too.

Terroir means everything in winemaking and that is expressed perfectly with the unique wines of Argentina. 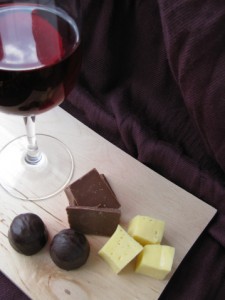 Tickets may be purchased at participating wineries during the event. The $45 ticket and glass package entitles you to a special commemorative wine glass, complimentary wine tasting and delectable samples of chocolate at each winery during the Red Wine & Chocolate Weekends. This event does not take place at one location. You travel from winery to winery, visiting the ones you are interested in exploring. Tickets are not required to attend this event. A $7.00 wine tasting fee will be charged at each winery for non-ticketed visitors. You must be 21 or over to purchase tickets and/or participate in wine tasting. All ticket sales are non-refundable.

The Olympic Peninsula Wineries encourage responsible wine touring and recommend that you have a designated driver in your group. Designated Drivers are invited to enjoy the food at each winery.

At Camaraderie we will showcase the savory side of chocolate! A perennial favorite, the cocoa-spiced pulled pork cooked in the winery’s wood-fired oven will pair with one of our great red wines.   Lots of red wines, discounts and chocolates will tempt our guests when visiting our lovely garden setting. 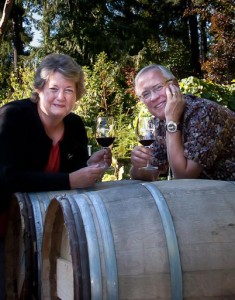 It was in 1981 that an intergenerational group got together over 100 pounds of grapes in our garage to make wine. We were having serious fun as we learned over eleven years about the mysteries of yeast, fermentations, and what we would do again and what for sure we wouldn’t. Volumes of grapes got bigger, the multi-family “crew” got bigger too, food was abundant and so was the laughter. It was family friend and English professor Bill Rearick that suggested we name our selves Camaraderie Cellars for the combination of comradeship, and festive sense about us. The name has stuck and the last twenty years of commercial winemaking have really been about living into that name.

Last Fall’s vintage was our 20th and we will be celebrating our 20th business anniversary in August of 2012. Where does the time go? It goes into the memory banks, I guess, and becomes, at best, the enriching stuff of futures to come.

Over the past twenty years Camaraderie Cellars has grown from its first vintage of about 200 cases to a current production of 3,800. We have earned more than 300 major awards for our wines, and have built a very solid winery and welcoming grounds adjacent to our home.

Over 20 years I have driven 140,000+ miles to retrieve well over 1,000 tons of grapes. I could tell you tales of flat tires, storms, blazing heat, and taco stands to remember (and some to forget), but the details and numbers are just footnotes to the real story of Camaraderie Cellars … its first 20 years.

What I remember most, and keeps me enthusiastic about the future are things like this:

The next years at Camaraderie will be sparked by the enthusiasm we began with in 1992, if not in 1981, but tempered with the realities of running a passionate business. The last couple of years have been a challenge for the whole industry but we are seeing steady renewed growth that is promising. We have chosen to stay the course unlike some other smaller wineries everywhere and have hit the reset button on who we are and what we are doing. We are still living into our name, “Camaraderie”.

I’ve learned that to “live into” our name of “camaraderie” wine must be understood as our product but not our vision. Our over-riding purpose is to demonstrate a life style that “the best things in life are meant to be shared”.

Here are some of our goals for the next few years, and they should make you smile as much as I am as I write this.

We’re open during the winter by appointment only, but we would love to see you, so call us to schedule a tasting. You can enjoy our wines year round as well by purchasing them from our online store. Our wines are also sold locally on the Olympic Peninsula at QFC.